To repair or enhance your gear, talk to the  Mecher in your school.

Once the item has reached its max Fatigue (for example: 10/10 Fatigue), the item can no longer be equipped. You will need to ask the Mecher to fix the item, which will cost Mar.

The higher level the gear and Fatigue, the more expensive it will be to repair.

The cost to repair at 1 fatigue varies depending on armor/weapon and rarity. Individual stats do not affect the repair cost. 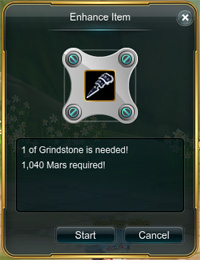 Enhancement increases the damage of weapons and defense of armor. Grindstones are needed to enhance weapons, while Coating Oils are needed for armor. Grindstones and coating oil are randomly dropped by defeated mobs, acquired by fishing, as rewards from certain quests and GM Events, or from treasure chests given from dungeons. The number of grindstones you receive from treasure chests will vary with the dungeon's level range requirement.

Talk to the Mecher to get an equipment enhanced. When the box appears (shown left), click the desired equipment you wish to enhance (has to be un-equipped). It will then tell you how many Grindstones/Coating Oils and how much Mar it will cost. Click "Start" to being the enhancing. 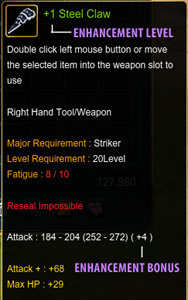 Once successful, your equipment will now have a "+1" indicating its enhancement level. If you enhance the same equipment successfully, it'll say "+2" and so on.

The current maximum enhancement level is +9, which is very difficult, and expensive, to achieve.

Equipment with high enhancement levels will start to glow. The higher the enhancement level, the brighter the glow. Items from +1 to +4 will glow white, +5 and +6 purple, +7 and +8 orange, and +9 bright yellow/golden. 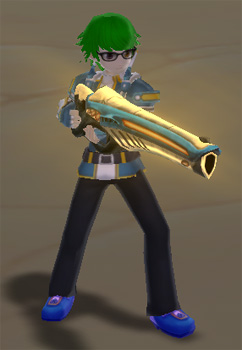 ATTm = maximum attack value of your weapon without enhancement bonuses

ATTt = total attack of your weapon with enhancement bonuses.

X and Y are integer enhancement levels, where:

Example: Determine the maximum attack value of a weapon with maximum base attack of 647 at enhancement level 6.

Therefore, the formula from above can be edited to give the following:

DEFm = total base defence without enhancements

Prediction: Calculate the DEFt of a piece of gear with 57 DEFm at enhancement level 8.

Retrieved from "https://remnantknights.fandom.com/wiki/Enhancement_%26_Repairs?oldid=8529"
Community content is available under CC-BY-SA unless otherwise noted.