The Fighter Circle is one of the minor class circles which rely on melee attacks, having very low attack ranges and MP's. But they have neutral base of attack, attack speed, defense and Hit Points (depending when the knight is a Striker or Crasher). 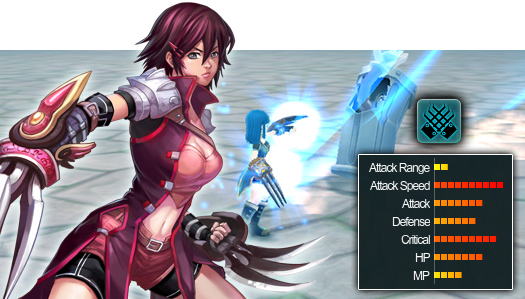 Strikers specialize In high attack speed and high critical hits, making quick work of almost any enemy. Strikers may have lower defense then their Fight Circle counterpart, the Crasher, but offense can sometimes be the greatest defense.

With skills like Adrenaline to increase their attack speed many times over and Leap Blow to close the distance between them and their enemies, a Striker is a force to be reckoned with.

Cons:Lowest attack range of the classes.

In a group is where Strikers are safest, they being balanced by a Priest or a Crasher to heal and take the blows. In competitive battles, such as Marble Battle, where you find yourself solo at times, your attack speed is where you’ll shine, often taking out enemies before they can react completely to your assault. 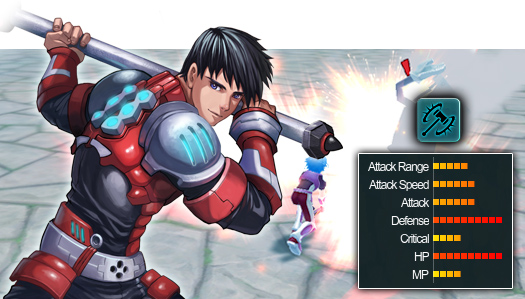 Crashers are like a tank on the battlefield, wreaking havoc with their decent attack power and very high defense and Hit Points. A Crasher is built to survive.

Using their giant battle hammers, they can use skills such as the Double Swing and the deadly Hammer Tornado to destroy groups of enemies and protect their allies. Crashers also have support skills such as Defensive Stance, which raises the defense of party members nearby.

Pros: Highest defense and HP of the classes. Has skills to keep mobs focused on them to protect weaker allies. Cons: Low critical hit rate and slow in attack speed.

Crashers are a great solo as well as support class. With their great support skills and bulky defense; they can draw attacks and defend as well as do great damage. In parties they can use Defensive Stance to increase the party’s over-all defense and help change the tide of any battle. Solo play a Crasher is a great assault choice, wearing out enemies with his high defense and attack.

Retrieved from "https://remnantknights.fandom.com/wiki/Fighter_Circle?oldid=8674"
Community content is available under CC-BY-SA unless otherwise noted.